52 Ancestors in 52 Weeks  topic this week is sports.  Any athletes in the family tree? How about any big sports fans? This is the week to write about them!

Two years ago I wrote this post.  I am being lazy this week and posting it again instead of trying to come up with some thing new.  Too bad they haven’t been able to do it again!  Wait until next year!

Wow, the Cubs won the World Series after 108 years.  The Cubs are in my DNA.  My grandfather and father were life-long Cub fans.  I inherited their love for the Cubs, and I am also a life-long Cub fan.  My father watched the Cubs or listened to them on radio every chance he got.  When I was growing up they played mostly afternoon games.  He would get home from work around 3 pm and turn on the Cubs.  He took me to my first Cub game when I was five years old.  I don’t remember much about it and didn’t understand the game.  I was only interested in the vendors.  But as I got a little older that all changed.  He taught me all about the game.  He also taught me how to throw, catch, and bat a baseball.  Back when I was young there was no organized baseball for girls.  So I only played in neighborhood games and at school.  But it helped me to learn the game.  I would go to my grandparent’s house, and grandpa would have the game on too.  Needless to say I grew up with the Cubs.  I was just coming of age in 1969 when the Cubs were in first place most of the season, but blew it and ended up in second place.  I went to a game once a week when they were in town.  My brother and I would stand outside Wrigley after the game by the door the players came out of and walk across the street to their cars.  We would get autographs and take pictures.  We even made a trip to St. Louis to watch them play the Cardinals.  We stayed in the same hotel and got to meet some of the players in the lobby of the hotel.  We rode a bus from the hotel to the ball park with some of the player’s families.   A couple of years later I got married and started a family.  I could no longer go every week to a Cub game, but we did go a few times a year.  I have two boys and they grew up with baseball in their blood too.  They went to the rally yesterday and took my grandson.  When they won the pennant, I cried that they finally made it into the World Series, and when they won the World Series, I cried again.  I thought of all the years my father never got to see this.  He did see them go to the World Series in 1945 but never win one.  My grandfather would have been 12 in 1908. I don’t know if he was a Cub fan at 12 or if he got to see them play in the World Series since there was no TV or radio.  But what really broke my heart was that my brother never got to see it.  He lived and died and he never saw them win a Pennant or World Series.  I can picture all three of them cheering for the Cubs from heaven.  I want to be able to share this with them and hear them cheer and shout with joy.  I’m thrilled that the Cubs finally did it and there is no more waiting till next year.  Too bad it took 108 years and so many fans like my grandfather, father and brother never got to see it.  Go Cubs Go, see you next year! 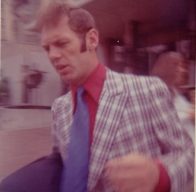