Grandma Beischer is in the middle

When I was growing up my grandfather’s parents lived with him.  When we went to visit Grandpa, we also visited with my great-grandparents too.  They were known to me as Grandma and Grandpa Beischer.  Grandma Beischer was 77 years old when I was born, and she could not walk very well.  It seemed to me that she was in a wheel chair most of the time, although she could walk with the assistance of special shoes and a cane. She had been in an accident that left one leg shorter than the other one.  I remember going with my father when he would take her for shoes.  We went to a store that custom-made her shoes by building up one shoe so her legs would be even when she walked.  One time I remember that we went to the shoe place in Chicago and then visited her son, Arthur, who owned a tavern in Chicago.  When I was eight, my grandfather died and left his house to my father.  My father let his Grandparents stay in the house.  Grandma Beischer was quiet and aloof.  She sometimes seemed kind of crabby so I always kept my distance. She was a hard person to get to know.   Grandpa Beischer was the opposite, outgoing and happy-go-lucky.

There are many stories about Grandpa and his escapades.  Grandpa was fond of his drink and felt no pain a lot of time.  During prohibition he made his own liquor, and I heard it was pretty strong stuff. Grandma did not approve of his gallivanting and drinking.  I guess she gave him you-know-what when he came home.  During prohibition, Grandma and Grandpa lived one of those city houses with a flight of stairs up to the back porch and door.  One time, Grandpa’s friends brought him home so drunk he couldn’t stand up, and his toupee kept falling off, so his friends stuck his toupee on backwards with chewing gum and tied a rope behind Grandpa to keep him from falling backward down the stairs.  Then they knocked on the door and ran.  When Grandma answered the door, Grandpa fell in.    When he woke up the next morning, he could not get the toupee off.  He had to ride the bus with his toupee on backwards to some place that could remove it.

Because of Grandma’s handicap, Grandpa did the house cleaning, washing clothes, dishes, and cooking.  He didn’t drive and had to take public transportation or get a ride from someone.   My father would cut the grass, shovel the snow, do minor repairs on the house.  My mother would take Grandpa to the store and to run errands.  Both my parents would take Grandma and Grandpa to see relatives or have them over to our house.  As they got older, it became more obvious that the day was coming when other arrangements were going to have to be made for their care. Grandpa could not see very well.  To find an electrical outlet, he would run his hands along the wall feeling for the outlet, and then stick his long finger nails in the plug.  Another time he was vacuum cleaning and banged the vacuum into the TV screen and broke it.  When he washed dishes, he didn’t get them clean anymore.  We began to refuse food or drink when we visited.  My mother would say, “It’s a wonder that they haven’t been electrocuted, set the house on fire, or died of ptomaine poisoning.”  One time Grandpa got a sliver in his hand, and by the time my mother saw it, there was a red streak going up his arm.   My mother took him to the doctor, and at 80 years old this was Grandpa’s first time to a doctor.  The doctor said to him, “Grandpa we are going to have to give you a shot.”  At that point, Grandpa stood up, pulled up his pants, looked around and said, “Where’s the bar?”  Doctor said, “Not that kind of shot, Grandpa.”  A few months later Grandma and Grandpa went to live with her daughter, Christine.  My father sold the house and a couple of years later Grandpa died and a few months later Grandma died.

Mary Fiderius was born 1 July 1870 in Allentown, Pennsylvania to Peter Fiderius and Christine Oberdoester.[1]   Mary had a sister Theresa and two brothers Leonard and Joseph.[2] She married George Manfroid on 5 February 1889 in Cleveland, Ohio.[3]  George and Mary moved back forth between Cleveland, Pittsburg, and Toledo during the 1890’s, and settled in Chicago around 1900.[4]  They had seven children, Laura[5] (died in infancy), George, Christine, Philip, Isidor (died at age 2)[6], Arthur, and Theodore.[7] I estimate that sometime between 1906 and 1910 George and Mary divorced.  I arrived at this estimation because their last child was born in 1906 and by 1910 two of Mary’s children are living in homes.  Arthur was living at St. Mary’s training school for boys in Wheeling Township, Illinois,[8] and Theodore was living at St. Vincent’s Infant Asylum in Chicago, Illinois.[9] The reason for the divorce is unknown, and I have been unable to find papers.  It was always known to family that Grandma Beischer was divorced and that Adam was her second husband,  On 22 April 1911 Mary married Adam Beischer.[10] At some point Mary got her sons back.  Mary and Adam had no children of their own. 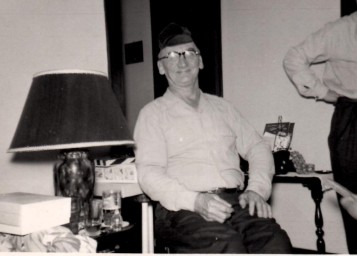 Adam was born in Milwaukee, Wisconsin on 5 July 1879. [11]  He came to Chicago, Illinois in 1891 at age 11 and lived there for 15 years. He moved in 1906 to west suburban towns finally settling in Elmhurst, Illinois.  He was employed by the American Can Company for 25 years working as a supervisor in the research department.  Adam died on 7 May 1962 at age 82 years, 10 months, and 2 days.  Adam is buried at Chapel Hill Cemetery in Elmhurst, Illinois.[12]  Mary died seven months later on 26 December 1962 at age 92 years, five months, 25 days.  At the time of her death, Mary was survived by two sons, her daughter, 13 grandchildren, 12 great-grandchildren, and 2 great-great grandchildren.[13] Mary was laid to rest next to Adam at Chapel Hill Cemetery in Elmhurst, Illinois, and they are together in death as they were in life.  Adam and Mary not only had longevity in life but also in their marriage of 51 years.