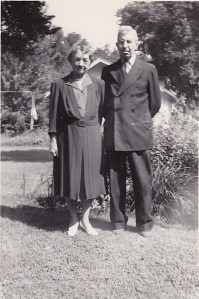 Richard Bowers was the oldest son born to Charles and Alexena Bowers in 1869.[1]  It is not known how far Richard went school.  Richard worked as a clerk, motorman, and janitor.[2]  He spent many years working as janitor at Washington School, probably the same one he attended as a boy.[3]  He also worked for the Illinois Power and Light Company.[4]  He married Emma Barnhardt in 1892 in Ottawa, LaSalle, Illinois[5]   This is just speculation, but I am wondering if Richard’s parents Charles and Alexena didn’t accept his marriage to Emma.  The reason I say this is that Richard’s parents are not mentioned in the marriage announcement in the Free Trader newspaper dated 30 July 1892.[6] Emma and Richard made their home in Ottawa, Illinois.[7] [8] [9] There is no evidence that Richard and Emma had any children.

Richard is the only one of my grandmother, Helen Bowers, father’s family that she knew.  She came to know Richard after everyone else in her father’s family had passed away.  She referred to him as Uncle Lamb.   She never mentioned how she came to know him.  But it was her only connection to her father and his family.  The pictures of the family probably come from him.  I found a letter from Richard’s wife, Emma, to my grandmother.  I have transcribed it below as well as posted copies of the original letter.  It was very hard to read the writing and did my best to transcribe it.

Dear Helen and all,

Glad to hear from you.  I am same but Uncle Lamb’s memory is so bad, he doesn’t remember things or people and now he has been in bed quite a while.  We have the Dr. and had him every day and now he comes twice a week and gives him liver shots.  Uncle Lamb is awfully weak and so makes it still harder for me.  I don’t get to rest and sleep I need.  He is restless at night and worries me should I go to sleep I wouldn’t hear him.  I don’t hear so good in one ear especially.  Some time ago, I had an abscess in that ear and suppose that is the reason now that I don’t hear so good.  I don’t know what I would do without Helen she sure is awfully good to us.  Nice you can go to your daughter’s when you want to.  It is to bad Russ had to be away, no doubt you are awfully lonely without him.  I’ve been having awful head aches and never feel good but have to keep going and hope I can.  I don’t want him taken to the hospital if it is possible he can stay home.  Sorry about Francis, I haven’t heard from her since she wrote at Christmas time.   Was glad to see your card and was sorry we were not here.  Decorating time when she called although true Uncle Lamb could ride out but of course not go out of the car so me now to decorate our graves and we have a lot to decorate.

Helen does ever thing she can for us.  I just don’t know what I would do without her.  My Sister was here for a little while last Tuesday she, her son, her daughter, and husband was so glad see them.  You see out of a large family only my sister and I are still here.  My sister’s son has been out of work for some time is of course trying to get work he had to quit the last place he worked was to hard for him he hasn’t been very well so I worry about them along with my own worrys but I so want him to get work.  Well dear Helen give our love to Francis and Pat.  I have written a couple of times so when she cans she will write.  I am sorry she is not well.

Have to stop now but we send love to all and hope you keep well and think of us some time.  Do you hear from Ralph’s folks.  I can tell you just love Uncle Lamb, he sure is not good. I am so tired all the time as I say I don’t get the rest and sleep I need.  Thank you dear Helen for wishing us well, we sure do need it he is quiet now the reason I am writing have to hurry so I hope you can read it.  Pray your son get home safe and Francis gets better give them our love.

Will try to do better next time. 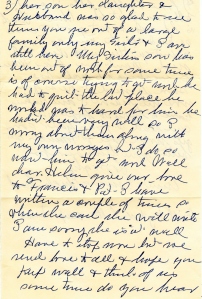 Note:  I changed the title of the blogs to Bower Family History 1757 – 1955.  When I started writing these stories, I was thinking that Richard’s sister Elizabeth was the last of Charles’ children to die in 1947.  When writing Richard’s biography, I realized that I was wrong, so therefore have changed the last part of post title to 1955.