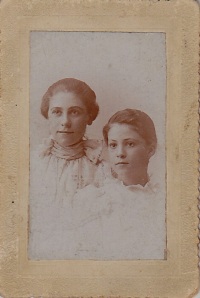 Aunt Liz is the smaller one.

My grandmother had three aunts, her mother’s sisters, Aunt Liz, Aunt Emma, and Aunt Agnes.  I had the privilege to know all of them, some better than others.  Today I’m writing about Aunt Liz as I think she is the most colorful one of the three or led the most secretive life.

Aunt Liz was born Elizabeth Reinhardt on February 10, 1881 in Amana, Iowa[1].  Two Years later the family moved to Ottawa, Illinois.[2]  Aunt Liz had two brothers and four sisters.[3]  Her father worked as a shoemaker and owned a shop in Ottawa.[4]

I knew Aunt Liz probably the best out of the three.  She lived in Ottawa, Illinois with family friends.  We would go down to Ottawa from Villa Park, IL several times a year to visit Aunt Liz.  My parents and grandparents were friends with the family she was living with, and I was friends with their daughter who was near my age.  I went down there for a week or two every summer to visit my friend.  Of course, Aunt Liz was there, and I would talk with her.  This was long before my interest in genealogy so we never talked about her family or her parents.  By the time I knew her she was old, and I would have never imagined that she was a sort of rebel in her youth.

It was always known in the family that Aunt Liz had an illegitimate son, Milton. I wrote about Milton on my blog dated January 14, 2013.  Milton was born in 1900[5] and Aunt Liz kept Milton and raised him.  Unfortunately, Milton died at the young age of 17.[6]  I had heard about her son Milton, but thought OK she made a mistake so what.  I knew she married later and was married a long time, but never had any more children or so I thought.

I decided to look for information on this child.  I found that she did have another child born in 1905 in Chicago, Illinois. The father is listed as Timothy Farrell on the birth record, and she named the daughter Helen.[7]  I found this strange because Aunt Liz was married to Timothy Farrell.  So why didn’t she keep her?  Now I needed to find out when she got married to Timothy.  The search continued on, and I found she married Tim in 1920.[8]  Now my question was why did she wait until 1920 to marry Tim?  I thought maybe he was married.   I next search the census records for 1910 and he was single, I found him on the 1900 census also single.[9] [10] I found her on the 1900 and 1910 census listed as single also.[11] [12] They lived a couple of blocks apart in Ottawa.  Why did she give up this child and not marry the father when she found out she was pregnant?  She kept one child, but not the other.  I find this odd.  I don’t know if I will ever know the answer.  I continued to search for Helen Farrell.  I found her on the 1920 census living at the Mary A. Judy Industrial School for Girls in Middlefork, Vermillion, Illinois.[13]  An Internet search turned up that the school was for girls who were having a hard time adjusting to foster care or had difficult family situations.[14]  I lose Helen after that.  She probably married, but I have no idea where or to whom and there are a lot of Helen Farrell’s.

In the mean time, my son, who into photography, found a picture I had of Aunt Liz when she was 18 years old with some things I have of hers.  She is in a fancy gown standing on a winding stair case.  It looked like it had been cut out of magazine because it was on magazine type paper.  Someone had written on the photograph Elizabeth age 18. My son knew someone who was into period clothing, and asked her to date the picture.  She said it looked like it was from around 1900 and it wasn’t the kind of dress that you would wear on the street.  It was more like a theatrical dress.  Aunt Liz would have been 18 in 1899.  So this information was correct.  Maybe the picture was from a play bill. What was she doing in play?  What was the play?  What part did she play?  These questions are still unanswered.  She never said anything about being in play to me, and I don’t remember any one else in the family talking about it.

I kept on searching the Internet and found that a Thomas Farrell owned a theater in Ottawa, Illinois.[15]  Now things were starting to make more sense.  At first I thought this was Timothy’s brother because on the census records he had a brother Thomas.[16]  But then when I researched the Thomas Farrell who owned the theater his age didn’t match Timothy’s brother Thomas.[17] Perhaps the Thomas Farrell that owned the theater is an uncle or cousin.  I do feel that they are connected somehow. Maybe Aunt Liz knew Timothy Farrell and this helped her get a part in a play or maybe she met him because she was performing at this theater.  Maybe it was neither.

After Aunt Liz married Timothy Farrell in 1920,[18] they lived in Chicago;[19] and they were married until Timothy died in 1947.[20]  Aunt Liz died on 5 August 1966[21] and is buried in the Ottawa Avenue Cemetery in Ottawa, La Salle, Illinois along side her husband Timothy Farrell and son Milton[22]

[22] Personal knowledge of author from being at funeral in 1966 and visiting graves whenever I am in Ottawa, Illinois.