This week the suggestion is to write about your pets.  Over my life time I have had many pets including dogs, cats, birds, turtles, and hamsters.

My parents had a dog when I was born, and I have had dogs all my life.  I have had Taby, Candy, Skipper, Pierre, Butchie, Pepper, Susie, and Spruce.  There were also many memorable dogs that my parents, brother, and grandparents had over the years that I was very close to.  My grandparents had a dog, Jeff, when I was little and then a Boxer named Ken.  While I was still living at home in addition to my Pierre, my brother had Jocko.  After I left home, my parents had Kiska and Bristol, two Alaskan Malmutes, that weighed 150 pounds each.  My brother had Ruffy and Brittney who was the sister of our Golden Retriever, Susie.

The dog that I have the fondest memories of is our Susie.

Our beloved Susie came into our lives in November of 1992 when she was just six weeks old.  She was a playful, golden little ball of fur.  Susie quickly grew into a beautiful adult Golden Retriever.  Although full-grown, she remained a puppy at heart for many years.   Susie was always loving, playful, patient, and kind.  When our oldest granddaughter was a toddler; we found my granddaughter sitting next to Susie sharing a bowl of dog food.  Susie was our constant companion through all our happy times and sad times.  She knew when one of us was hurting or sad.  She loved our camping trips and the great outdoors.  When we think of Susie, we can’t help but think about her sister Brittney who passed away in 2005. Susie always held her wagging tail high until the last couple of years when she was riddled with arthritis.  She went deaf and started sleeping a lot.  She would have good days and bad days.  Then the end came on March 22, 2008.  We had 15 ½ wonderful years with Susie, and we miss her very much.

Our current dog, Spruce, is a Beagle.  She is very much like Susie in personality.  We got her when she was four years old.  My son and daughter-in-law got her from a shelter for their daughter.  They had her a year or so when they moved and could not keep her.  Susie had just died about 2 months earlier so we took Spruce.  From what I can tell from her adoption papers,  she had two homes before my son and daughter-in-law adopted her.  So we are her fourth home and last home.  She is now in her forever home.  We’ve had her three years now and love her very much.  We could not ask for a better dog.

We got our first cat when my oldest son was about 12 years old.  A female cat we named Lizzie.  It was my first experience with cats, and I fell in love with Lizzy.  I would call her Miss Lizzy because she was a little lady.  My other son brought home a stray kitten we name Simba and then about a year later he found another one named Niki.   All are gone now but we have another cat, Paige.  At one time she belonged to the library where I work.  As a kitten she was  found under the shed behind the library.  The library had her for about 5 years when someone became allergic and they had to get rid of her.  I took her home, and I am not sorry about that decision.  She reminds me so much of Miss Lizzy.  She had medical problems while at the library, but  is rarely sick now.  She gets a lot of attention and love in our home. 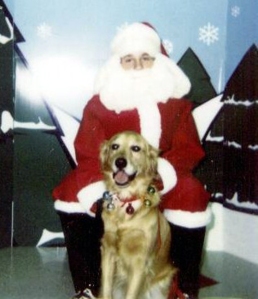